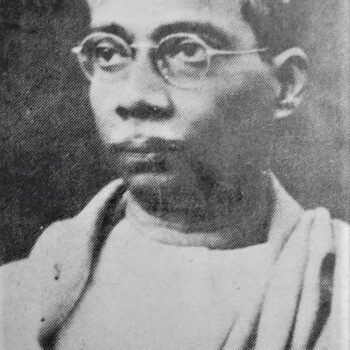 One of the foremost commercial artists in the country, Jatin Sen was a perfect creative foil to the chemist, author, and lexicographer Rajshekhar Basu (1880-1960), well-known in Bengal as a man of diverse achievements. Rajsekhar worked at Bengal Chemicals, (a much-lauded enterprise of Indian entrepreneurship), and apart from his regular duties, he wrote copies for advertisements of Bengal Chemical products, designed the layout himself, and left the final execution to Jatin.

Jatin was born in Chandernagore, but he spent his childhood in Darbhanga, where his father was on the Maharaja’s staff. He showed a flair for drawing from early childhood, and when he sought admission to the Government Art School, Percy Brown, the principal, was suitably impressed. Jatin was a regular at the home of the brothers, Shashishekhar, Krishnashekhar, Rajshekhar and Girindrashekhar, at 14, Parsibagan Lane, where the rambunctious adda attracted Bengal’s leading minds. Girindrasekhar (1887-1953) was the first Freudian psychoanalyst in the non-Western world, and also wrote books for children. Jatin, among his other writings, has left behind a lively account of the adda.

Besides his illustrations, he designed the logo of New Theatres, the first cover of Desh magazine, and helped draw Bengali typefaces for Linotype machines. He drew the covers of magazines like Bichitra and Kallol. His art was much sought after at Bharatbarsha, Sachitra Sisir, Manasi o Marmabani, and Dainik Boshumati. The corrupt, turbaned, dhoti-clad businessman with a porcine snout, epicene Pelab Roy, ancient Hanuman yanking his young mistress by her locks, the venerable Brahmin reading the marriage vows to an English woman and her fiancé inside a train compartment, the celestial ecdysiasts, the coy ogress, and the viragos who kept their docile hubbies on a tight leash — all came alive in the illustrations by Jatin Sen. Jatin also inked intimidating women judges, formidable policewomen and bosses, and fashionable lassies with cheroots. Those were the days when emancipated Bengali women were emerging for the first time into the public domain, and the average Bengali Bhadralok felt a sense of intimidation at the possibility of a new power play. In Sachitra Sisir, Jatin drew a series of sketches called “Nari Bidroho” (The Women’s Revolts) in 1919.  One of them shows a sari-clad fashionable woman smoking a cheroot. Another sketch, titled “A Modern Bengali Woman”, has a henpecked husband offering tea to his wife, who is reclining on the bed. When Jatin made drawings for advertisements, he went back to the languid ladies straight from Ajanta; those drawings were probably influenced by the prevailing nationalistic fervor. He drew an array of coiffures — from traditional to fashionable to downright bizarre. Jatin excelled at ornamental and decorative art. His jewelry designs were intricate and unostentatious. Jatin Sen’s illustrations for Girindrasekhar Basu’s Lal Kalo (Red vs. Black Ants), published in 1930, depict meticulous anatomical detail blended with optimum use of colors and is still regarded as a high point in the illustration of children’s books. In 2001, Byangochitri Jatin Sen Rochona Songroho (Collected of Writings by Humor Illustrator Jatin Sen) was published by Ananda Publishers, Kolkata. In 2007, the magazine Bishoy Cartoon published a special issue on Jatin Sen, which was a perfect retrospective of his illustrations, articles, vintage Bengal Chemical ads, and cartoons. 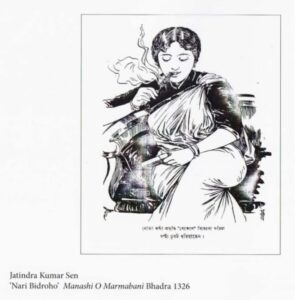 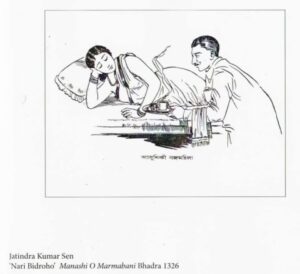 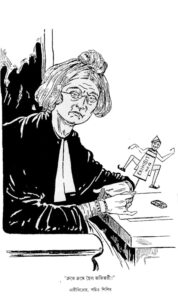 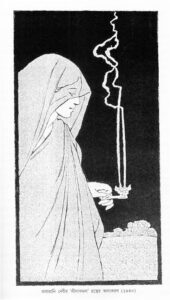 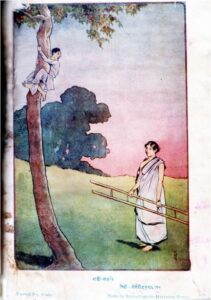 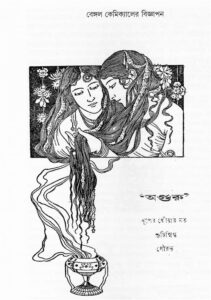 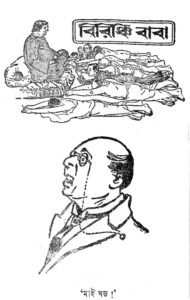