Tekka (Ace, টেক্কা), which proclaimed itself to be a ‘one of its kind, never attempted before’ cartoon magazine began with a bang on 16 August 1963. An intrepid experiment by any standards, the magazine was a no-holds-barred cartoon album, lacking detailed written content. To that end, it was certainly new. Tekka featured Saila Chakraborty, Prafulla Chandra Lahiri, Promotho Samadder, Kamal Sarkar, Amal Chakraborty, and Omio — a formidable line-up of active and renowned cartoonists.  Tushar Kanti Das, the editor of Tekka and a cartoonist himself, drew cartoons for Sachitra Bharat, Joshtimadhu, Nabokallol, Cine Dupur, Ulto Rath, etc. Tushar Kanti signed his cartoons as ‘Bhishma’ in Jugantar, where he had a brief stint as a freelancer. The concluding page of Tekka had ‘Manyamukh’ (Esteemed Face), which carried a caricature and a short biographical sketch of a famous personality in each issue.

Das started Tekka after the fashion of Mad or Punch and like so many of the inspired impersonations of either, this grand and well-meaning project too, lost steam midway. In fact, Tekka was not unlike many purpose-driven modernist periodicals which started with a bang and sooner than later, ended with a whimper. Having left an inedible mark, Tekka closed down only after a couple of issues. 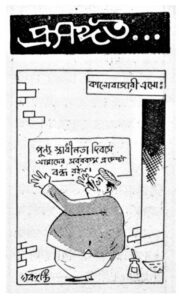 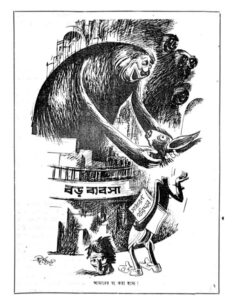 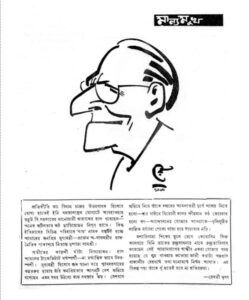