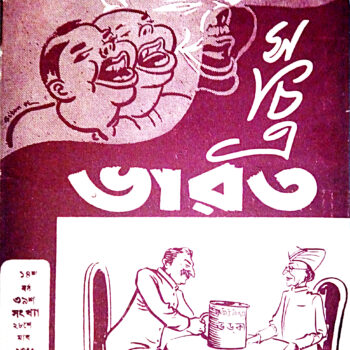 Sochitra Bharat (India Pictured, সচিত্র ভারত) was a Bengali illustrated weekly that was first published in 1922, focusing on literature, film, and theater. The journal specialized in satirical writings and published photographs of celebrities on glossy paper, unusual for its time. Sachitra Bharat’s editorial entitled ‘Khapchhara’ (Disjointed), and the section ‘Sat Panch’ (Miscellany) focused on international and national news. Stories from cinema and theater were published in ‘Alochhaya’ (Light and Shade). Occasionally, sports news and obituaries were also published. In short, Sachitra Bharat was a mixed bag, and the average Bengali household lapped up its assorted content. However, Sochitra Bharat‘s forte was cartoons. Known for its front-page cartoon spread, mostly drawn by Reboti Bhushan and Promotho Samaddar, the magazine had its own take on matters of regional, national and international political interest. It was a strong critic of US foreign policy. When Reboti Bhushan was in his peak form, the magazine gave him ample space for his witty ideas. Cartoonists Prafulla Chandra Lahiri (Piciel), Saila Chakraborty, Ashutosh Dutta, Promotho Samaddar contributed to Sochitra Bharat. Encouraged by Sochitra Bharat’s editor Promod Samaddar, Promotho sketched relentlessly for Sachitra Bharat and the pages of the magazine bear testimony to his most creative years. The popular magazine had a runtime of more than four decades, which coincided with the ‘golden age’ of illustrated humor in Bengal. Sochitra Bharat closed down in the early 1970s. 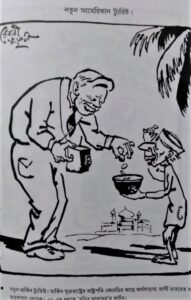 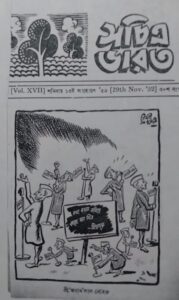 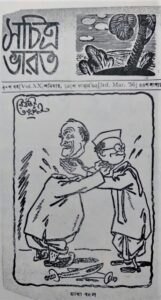 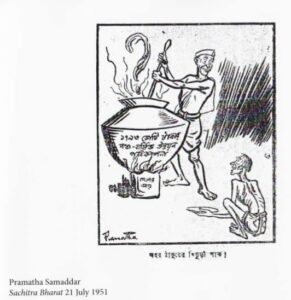 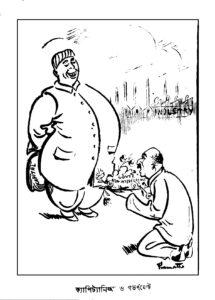 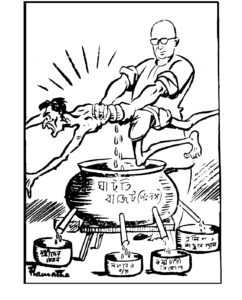 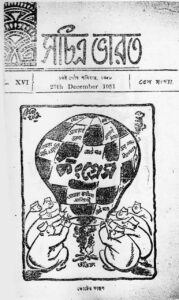 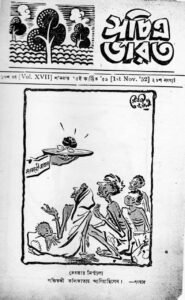