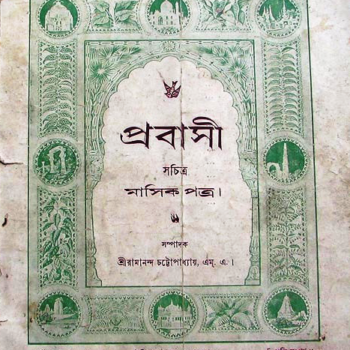 Founded in 1901 by the free-spirited Ramananda Bandopadhyay, the Bengali monthly Probashi (The Foreigner, প্রবাসী) was a highly influential literary periodical, which also made scope for illustrative writing and cartoons. Among its high points was the serializing of Tagore’s Gora (1907-1909). And it wasn’t just Tagore. The list of contributors to Probashi read like a veritable who’s who of Bengal’s intelligentsia. In fact, its fame, the standard of debate, and the writers it attracted remain unsurpassed in the history of Bengali periodicals. Probashi also included articles on history, art, archaeology, sociology, education, literature and literary theories, scientific topics, and travelogues. Ramananda also published Modern Review, an English journal of repute, widely read by men who mattered in the early half of twentieth-century India. Together they are a mirror to the westernized, learned cosmopolitan world of the Indian elite of that period. Probashi was the first periodical in Bengali to feature a reproduction of a photograph on its cover purely for the sake of illustration. It also played a pioneering role in public use of caricature, in which Gaganendranath Tagore and Chanchal Mukhopadhyay made overt socio-political statements. The two magazines also published colour plates from the works of Bengal School paintings. They were so well reproduced that subscribers used to frame them.
Gaganendranath’s cartoons in Probashi did away with bold lines, bright colours and mythological characters, and assumed a very European realist style. The content, however, reflects a strong disdain for Anglicised Indians blindly mimicking the ways of the white man. For example, in a cartoon published in 1915–16, Gaganendranath drew an Indian man dressed in European clothes in distress and captioned it: ‘By the sweat of my brow I try to dress like a Sahib but that man calls me Babu!’. No wonder, Rabindranath, his uncle, called Gagan a radical swadeshi. His cartoons for Probashi and Modern Review between 1916 and 1930 created a hall of fame of cartoons in Bengal. 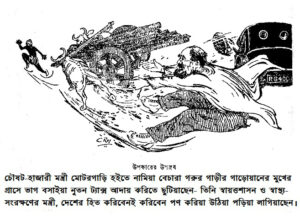 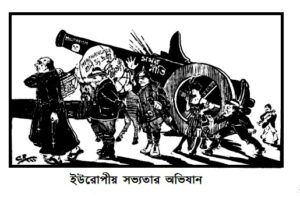 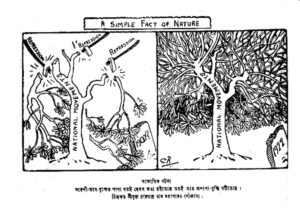 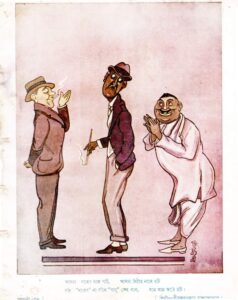 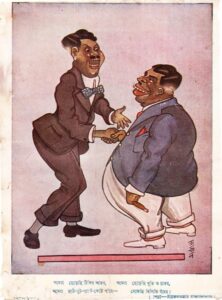 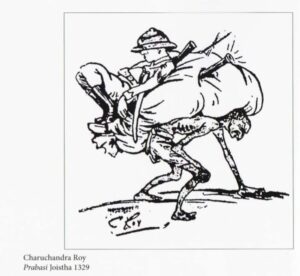