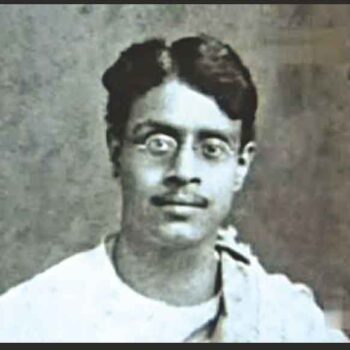 Poet, writer, illustrator, and publisher, Sukumar Ray inherited his father Upendrakishore’s artistic genius. A graduate from Presidency College, Sukumar studied photography and printing technology in England and later invented new techniques of halftone block making that he carried forward from his father. Sukumar grew up seeing his father write, paint, invent new technologies for printing, and compose music. He was born at the high point of the Bengal Renaissance and his Bengali Brahmo household was riding into the modern period on a ballast of invention, humour, scientism, and boundless curiosity. When Sukumar took over the family magazine Sandesh after his father’s demise, he not only inherited a legacy but created an even more worthy one.  Like his father Upendra Kishore, who created illustrations accompanying his writings, Sukumar Ray also drew for his poems. Though not a trained artist, Sukumar had a keen eye for details of caricature, expressions, actions, proportions, and human anatomy. Apart from illustrations, Ray also explored comic strips with rhythmic dialogues that were used as filler for Sandesh. These strips are without speech bubbles or text boxes. The text is printed under the panels that are arranged vertically. Here Ray, being way ahead of his time, played with the literal meanings of phrases that are very visible in modern graphic novels. For example, in one panel, the text is: ‘Haru, a dull boy got zero in class test’. Ray showed the teacher handing the boy a sphere. In another panel, Haru’s father is fiery with anger (Rege Agun, a Bengali phrase literally meaning as angry as fire) after knowing his son’s result.

Ray’s writing seems to be created for children, but underlying the simplicity and humor of his language is a powerful social commentary and satire. Several of his poems are actually a satire on the Bengali babu — puerile, subservient, and lover of all things colonial. For instance, the pot-bellied, lethargic Bengali man became Kumropotash (Pumpkin Puff) in his poems. His Ramgorurer Chana is an imaginary glum-faced creature,  always dreading the possibility of an unintentional grin. His oeuvre comprised caricatures of every ‘social type’ from the period: Congressmen, clerks, ultra-nationalists, Gandhians, and policemen. One of his most prominent prose writings, Ha Ja Ba Ra La (Mambo Jumbo, 1916), a loose adaptation of Alice in the Wonderland, shows strange creatures that represent social satires in colonial India. In another series, Pagla Dashu (The Crazy Dashu, a series of school stories), Ray used minimal, bushy line drawings that are similar to Abol Tabol illustrations, though less decorative. In another story, Heshoram Hushiyarer Diary (The diary of Heshoram Hushiyar, an eccentric Bengali adventurer with a shadow of Professor Challenger), Ray again incorporated illustrations of more fantastic beasts that reside in some unexplored region in the Bandakush Hills. In some ways, all three not only pre-empted the graphic novel by decades but have set standards that have not been breached since. In Ray’s Kheror Khata (the diary of rough sketches), we can see many enigmatic cartoonesque characters and creatures in the making. Sukumar could not write about them due to his untimely demise at the age of thirty-six in 1923. 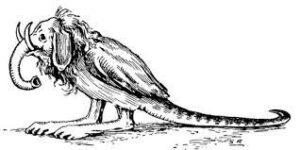 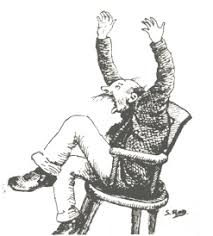 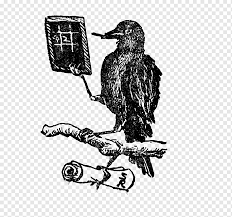 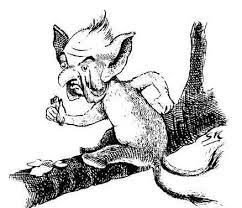 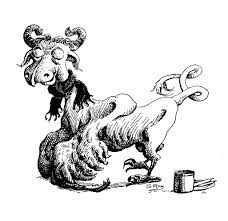 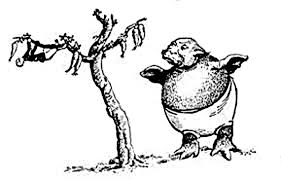 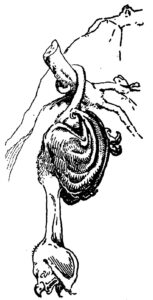