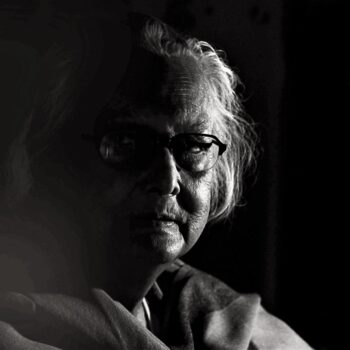 Childhood in Bengal between the 1960s to 1990s cannot be imagined without Batul the Great, Nonte-Phonte, and Handa-Bhonda. These archetypal graphic series for children made Narayan Debnath a household name a popular culture staple. In his early years, Debnath worked as a freelancer until he joined Deb Sahitya Kutir in 1950. In 1962 Handa-Bhonda (The Dumb and the Fool) appeared in Shuktara, which was Narayan’s first big break in the comic world. The Laurel-and-Hardy-inspired adventures of this similarly complimentary comic duo were an escape for youngsters during the tumultuous political atmosphere of the 1960s. When the appeal of Handa-Bhonda was fading, Narayan created Batul, The Great in 1965, again for Shuktara. Batul, a heroic muscleman with a 40-inch chest and stick-thin legs and dressed in a pink vest and black shorts – had super-human strength who bulldozed his way out of every problem. The origin of the character is, in fact, dipped in nationalist triumphalism, echoing the Indo-Pak war in 1965. But unlike the American superheroes, Batul’s vigilantism was never co-opted as soft power. The success of Batul ushered a regular culture of serialized comic picaresque in Bengal. Debnath managed to renew his oeuvre periodically, by birthing a new set of comic strips. Nonte-Phonte (1969) was mischievous pair who kept their hostel superintendent on his toes; Patalchand (1969) was a young neighbourhood magician, Bahadur Beral (The Wonder Cat, 1982) is too smart for his own good; Danpite Khadu aar tar Chemical Dadu (1983), was a Rick and Morty-like pair of a young boy and his scientist grandfather, and Petuk Master Batuklal (1984) was a gluttonous schoolteacher. Like Johnny Hart and Hank Ketchum in America, Debnath should be accorded a unique distinction for his variety and longevity. His style remains unmistakable and inimitable and his drawings were exceptionally neat, even if his gags were mostly slapstick, fatuous and repetitive. He was awarded the Padma Sri in 2020, at the age of 96, and is the only comic artist to have been awarded an honorary DPhil. This grand old father of Bengali graphic fiction died On January 2022, bringing to an end at least one kind of history (the mainstream it could be called) of the comics in Bengal. 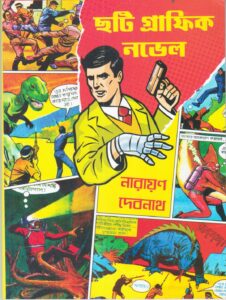 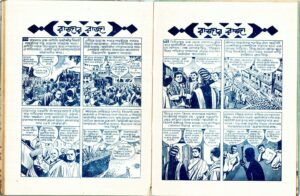 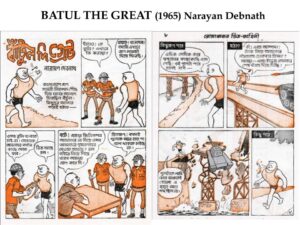 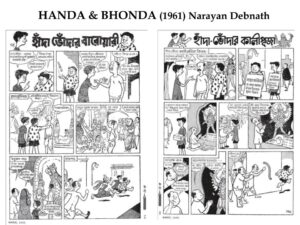 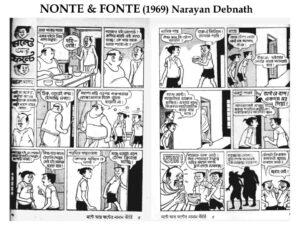 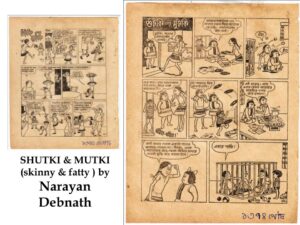